Jewellers Vault in Capalaba is showcasing the work of Feature Artist Sharma Ferguson until the end of October.

Sharma Ferguson was born in 1978, Australia. As a child she was always an avid inspiring artist, waking early in the mornings to create endless drawings. And then later discovering the joys of paint in the early years of high school.

While the majority of Sharma’s childhood was spent growing up in Far North Queensland, one might say she has had a somewhat gypsy upbringing. Spending the first 9 years of her life living in a converted school bus, travelling and living in various parts of Queensland. Always feeling like the odd one out and the newcomer may have contributed to Sharma’s attraction to art.
Taking inspiration from artist such as Salvador Dali and M.C. Escher. Sharma’s greatest inspiration has always been the world and life itself. Most of Sharma’s paintings follow in either Progressive, Boho, Pop, Abstract or Surreal style/genre. Sharma draws beauty from life, animals, landscapes and emotions to create her paintings.

With no formal training other than what was learnt at high school, completing grade 12 in 1995. Sharma taught herself to paint, and was a high achiever in the Arts during High School. Winning various awards for her Design and Art skills. Winning first prize for a pen and ink stipple drawing, and third prize for as abstract painting in the Tully and District Show in North Queensland was an achievement for Sharma in 2004.

The exhibition/showcase with RAW Australia at ‘The Met’ in Fortitude Valley (2016) was a huge achievement and the first of its kind for Sharma. Being a member of RAW Australia then led to further opportunities to showcase Sharma’s Art, including a solo showcase at The Fairfield Library in early 2017.
Sharma has been a regular Market Stall Holder over the last four years.

Displaying her work in a variety of Handmade local stores, showcasing Art, Hand painted shoes and hats which have been sent all over the world including: France, Dubai, England, New Zealand, South Africa, America and all over Australia. Sharma’s passion still lies with a paintbrush and canvas.

As a wife and mother of three children aged 14,6 and 5 years old, time is of the essence. Sharma puts her heart, love and soul into every piece of work she produces. Determined to continue to produce artwork that represents herself and the things that inspire her.
Loving colour, patterns, texture and filling every little gap of blank canvas with some kind of wonderful.

The earth without ‘art’ is just ‘EH” 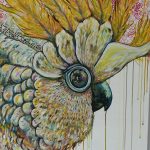 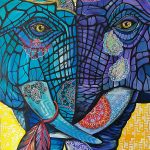 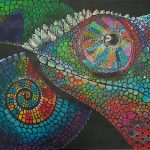